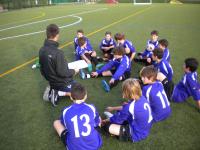 JCoSS vs Bishop Douglas:  JCoSS ran riot against Bishop Douglas scoring all 9 goals in a fruitful first half. Adam M cultivated himself a hat trick whilst Alex E’s Fifa 12 rating rocketed as he etched himself into the history books by becoming the first ever JCoSS player to score a goal in 4 consecutive fixtures. Further goals from Or R, Joel W, Bengy Radnor, Jonathan B and a 40 yard pile-driver from Sam L completed the JCoSS rout and piled more misery on the league’s mere wannabe’s. Top of the league by a country mile and with goals in the bank the league is only ours to lose.

JCoSS vs East Barnet:  After demoralising lowly opponents Bishop Douglass, JCoSS found themselves up against their arch rivals, East Barnet in a top of the table clash. The match was built up to be a battle between two heavyweights and it did not disappoint as both teams went toe-to-toe for what seemed was two insanely long rounds. Blood there was not, but a number of big time reputations were scarred that day. The match was tight, nip and tuck all the way but in true rope-a-dope fashion JCoSS weathered a heavy bruising from the combination killer blows of East Barnet’s centre midfielders before striking back with a free flowing counterattack to win a penalty. Up stepped Adam M who made no mistake in slamming it home from 12 yards giving JCoSS true bragging rights in East Barnet.

JCoSS vs Ashmole:  If watching millions of migrating wildebeest gallop across the plains of Africa is one of nature’s greatest spectacles then unquestionably, sports answer must be to watch the free-flowing football of JCoSS to near football nirvana.

JCoSS started tentatively, almost as if waiting for the opposition to lay their cards on the table. Ashmole did just that: a royal flush it was not but there were aces aplenty. Ashmole’s tenacious and well-fed centre midfielder inflicted a torrid time on the centre half duo of Sam B and Sam L but they stood firm and snuffed out attack after attack. JCoSS turned the screw and with some delightful, incisive passing from the midfield duo of Eddie L and Jonathan B the lads carved gaping holes in the visiting defence. It was only lady-luck that siding with Ashmole’s cumbersome centre half that kept the JCoSS tally blank.

Joel W was simply unplayable at times as he gave the opposing back four a real nightmare that will no doubt haunt them for weeks to come. It was the afore-mentioned midfield maestro that opened this game right up. A finely weighted pass from Joel found JCoSS skipper, Jonathan B, whose two neat touches found Bengy R who in turn played a majestic ball to the pugnacious Adam M. Akin to a young gazelle, Adam broke free from his shackles of expectation to effortlessly slide the ball past the visiting custodian from an angle so acute that not even savant Miss Viner/Archimedes could fathom. 1-0.

Within minutes Ashmole were level, courtesy of a real schoolboy error.  Three attempted clearances ricocheted off groins, faces and legs before the kindly ball fell at the feet of Ashmole’s centre forward, who was presented with the simplest of tap-ins to unjustly level the scores. 1-1.

Alex E may have missed out on the short list for the Ballon d’Or but on this form he’s proving to be from a different planet and far too clinical for mere earthly recognition. Alongside every scorer there is a creator. Luka J outfoxed two players with a simple drop of the shoulder before cutting the ball back directly into the goal-tinted/speckled path of Alex E. Not wanting to mess around, Alex unleashed a rasping drive that flew past the awe struck keeper to seal the win and maintain JCoSS’ harmonious relationship with victory. Sheer quality, 2-1.