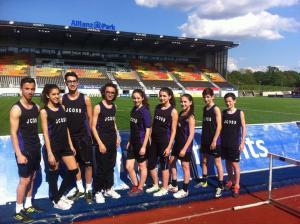 JCoSS Athletics team performed fantastically well at the district trials with 4 students now hopeful of being selected for the District Championships later next month. Philippa Steen snatched 1st place in the Long Jump, whilst Hannah Harris and Harry Brodin both secured 2nd place in their 100m sprint races.  Alanis Cope ran a superb hurdles race to bag 2nd position in the U15 girls heats and now has a chance at being selected for the forthcoming championships. Well done to all those involved and we await the trial
selection with bated breath.

JCoSS went in this Barnet Year 8 Power league tournament as the ‘bookies’ favourites, especially after the Year 9 team had swept the board at their year group’s tournament the week before. The funny thing is, you see a skint bookmaker as much as you see a skinny butcher – and with good reason. They certainly know their onions, or their meats, or odds in this case as JCoSS ran out tournament winners in one group and third place in the other. Having conceded only 3 goals throughout the
whole tournament of 16 games the defensive nature and battling qualities of the JCoSS shone through.

If one could report on a football match through images alone in this case it would depict champagne bottles smiley faces and thumbs up aplenty.  JCoSS Year 9 Boys football team played with all the chutzpah and swagger of champions elect even before they were crowned winners of the Barnet Schools Power League tournament.  With both JCoSS A and B teams both finishing 1st in their respective competitions it proved to be a successful tournament and resulted in a clean sweep of medals, trophies, pride and swag for the lads.

Both the A and B team won 6 matches out of 7 on their way to victory with the Golden Boot awards going to the enigmatic striker Alex Rose and the effervescent
midfielder Josh Shack.

Well done to all the students. a fantastic achievement!!