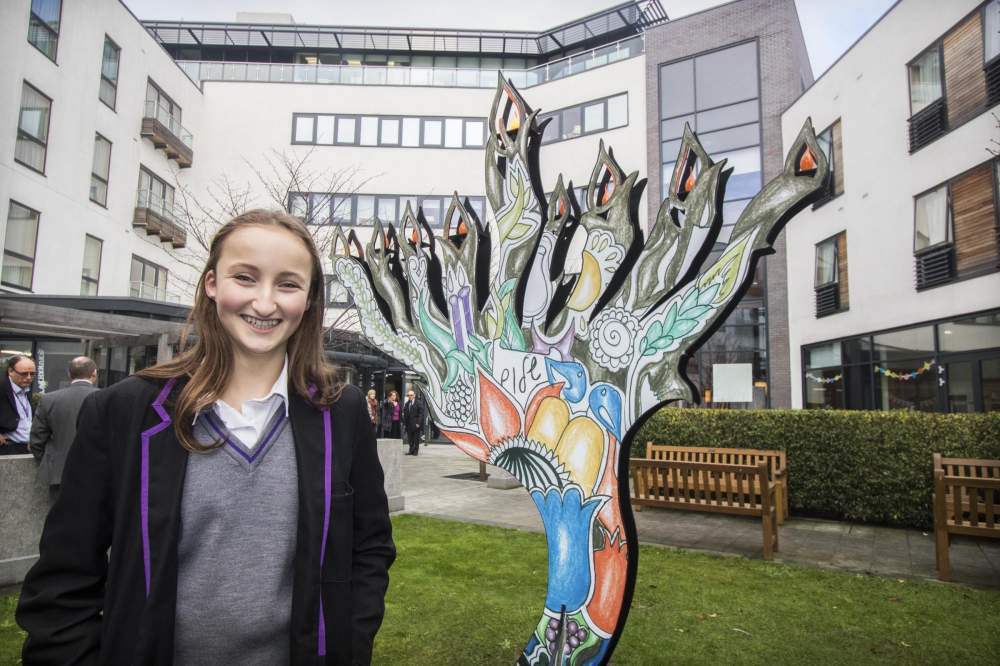 Evie Raphael, Year 10, saw her vision turned into a reality this week in the shape of a 10 foot Chanukiah at Jewish Care’s Maurice and Vivienne Wohl Campus, lit for the first time on the first day of Chanukah.

Evie’s Chanukiah design was the winning entry in a competition which was the culmination of an informal Jewish education project which began earlier in the year with students at JCoSS. Students across the school were invited to design a Chanukiah inspired by the colourful mural in the entrance to the Campus building in Golders Green, which focuses on different aspects of Jewish life.

The entries were shortlisted by a panel, including representatives from JCoSS, David Sugarman from Metalcraft, who made the Chanukiah and Jewish Care. The choice of the favourite design was made by consensus of the Campus community and votes poured in from members of the Michael Sobell Jewish Community Centre, residents of Otto Schiff, Selig Court and Rela Goldhill at Selig Court, Jewish Care volunteers and staff.

Evie was joined by family and members of the JCoSS community, including 40 students, the school choir, Mr Moriarty and staff along with members of Jewish Care’s Michael Sobell Community Centre and residents of the homes on the Campus. After lighting, students and community centre members enjoyed doughnuts and a Chanukah quiz before the JCoSS choir sang for them all.

The 10 foot Chanukiah which sits in the centre of the campus garden is now a permanent feature. It was made possible by a generous anonymous donation and was crafted by Metalcraft, the metal workshop in Tottenham.

“It’s amazing seeing my artwork on such a large scale of an almost 10ft Chanukiah. The design is inspired from the mural at the Jewish Care Maurice and Vivienne Wohl Campus and the Chanukiah is like a tree representing all of the individuals, each with their own roots and background, who come together to meet through their Judaism at Jewish Care’s Community Centre and homes.”

“I couldn’t believe it when I was told I was the winner! I’m hoping that the Chanukiah will bring brightness and pleasure to people who come to the garden and it makes me happy to think that I’ve made a difference to other people through my art.”

“This beautiful new Chanukiah is a fantastic Chanukah gift for everyone at Jewish Care’s Maurice and Vivenne Wohl Campus. It symbolises two of Jewish Care’s core values – those of creativity and inclusivity, which we have in common with JCoSS. The creativity the JCoSS students have shown throughout this project and the inclusivity of our community centre members and residents who enjoyed meeting the students and being part of that process.

“I’d like to congratulate Evie on her fantastic winning design, which thanks to our generous donors has been brought to life by the team at Metalcraft. I’d also thank the JCoSS team, for leading this fantastic collaborative project and encouraging the students to volunteer their time and energy to help us make life richer and more meaningful for our members and residents.”

“This project was a wonderful opportunity to offer our students a real-life design project which reflects the school’s Jewish ethos of inclusivity.  We have a very active volunteering relationship with Jewish Care, so the chance to design something which would become a permanent feature of the Maurice and Vivienne Wohl Campus was very exciting for a lot of our students.  The competition was fierce and the standards very high and we commend all the entrants, we are extremely proud of Evie’s design.  Although this is very exciting for all, the part we are truly proud of is our students who raise money and give their time and energy in volunteering at Jewish Care as well as other charities, truly embodying the values of the school community.”