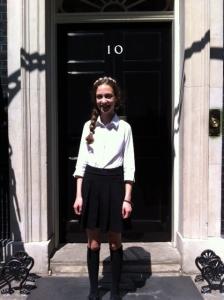 Congratulations to Orli Vogt-Vincent, Year 9 JCoSS student, who won a national writing competition from over 1,300 entries and was invited to Downing Street for her prize.

“Thirteen in 13”, launched by the Anne Frank Trust UK, asked anyone turning 13 in 2013 to say how they would make Britain a better place in an online letter to the prime minister.  In her letter, Orli urged Mr Cameron to allow creativity to flourish in Britain’s schools by ending the obsession with tests and targets.

The Prime Minister wrote a joint response to the 13 finalists tellling them their letters were “all very well argued, bursting at the seams with passion and original thinking.” Though Orli did not get the chance to meet Mr Cameron, as he was called to another event, she said her trip to No 10 “was the most exciting day of my whole life.”

Gillian Walnes, executive director of the trust, said: “It is gratifying to see how seriously the Prime Minister has taken the concerns of Britain’s newest teenagers and I hope that, like Anne Frank’s 70 years before, their voices can make change.”

The contest reflected the fact that Anne Frank received her diary as a present on her 13th birthday. A panel, including Anne Frank’s step-sister Eva Schloss, selected the winner.

Orli’s full letter to the Prime Minister was as follows:

J.K Rowling once said, “It is our choices, that show what we truly are, far more than our abilities.” But in the British school system, it is not anymore. It’s impossible to remember writing a story  in school just because you actually want to, without a criteria of what you need to include to get the right levels.

I can’t enjoy a subject anymore without the fear that I’m not going to achieve my target, that I’m not on track, that I’m not prepared for the countless assessments we’re bombarded with every month. Harry Potter probably didn’t fit the level criteria – billions sold.

As young individuals, we are represented by a few numbers that are supposed to show our intelligence – what about things outside of intelligence? What about creativity and finding an identity? We have to try and find ourselves through numbers that sum up how clever we are. What about expressing ourselves? Where did that go?

People need to listen and understand that we’re young and this isn’t necessary. I’m not saying abolish all tests – our progress obviously needs to be checked, but school isn’t just about grades – it’s about independence and exploration.

I say give creativity to young people while you still can, let them express themselves and be who they want to be before they grow up, and the world tries to make them something they’re not. And in the words of Stephen Sondeheim, “Stay a child while you can still be a child.”