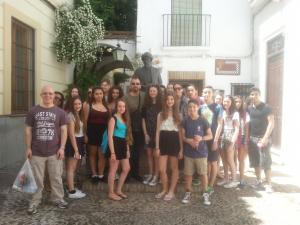 Last term, twenty three JCoSS Year 10 students and three members of staff embarked on a ground breaking educational trip to Andalucía, in Southern Spain. The staff, Miss Gustard – head of Year 10, Mr Marco – head of security and the legendary Señor Fernández – head of Spanish, made the trip special by getting involved with the activities as much as the students. The Year 10s had an amazing time learning about Spanish culture whilst spending time with their friends.

We arrived to a sunny morning in Malaga after a two hour flight- a welcome change from rainy London. We went to the hotel in Torremolinos for a traditional Spanish paella (kosher) and dropped off our bags. The staff at the hotel were very friendly and accommodating especially towards those with specific dietary needs. We then travelled back to Malaga, a short drive away, and visited a medieval castle where we could see an amazing view of the city and countryside in one direction and in the other the clear blue Mediterranean. We walked about the winding quaint streets in the Jewish quarter of the city lined with beautiful houses lead by our fabulous tour guide who only got lost once (or twice). Afterwards we saw interesting and inspiring art at the Picasso museum and one of many thought provoking discussions with Miss Gustard about the significance of his work.

The next day we went to Cordoba where we learned about Spain’s short lived multi-cultural history where Jews and Muslims lived in relative harmony before the extremist Castilian Christians took over and expelled the Jews in 1492. This was documented in great detail at “La casa de Sefarad” where we also heard traditional Sephardi music, sung in the language of Sephardi Jews, Ladino. We also learned about Maimonides and later on visited his statue. There was a myth that all those who rubbed the feet of this statue would do well on their exams so as you can imagine we were all enthusiastic to test this out! However seeing the Mezquita de Cordoba was the highlight. The incredible building was decorated with beautiful arches and a mixture of Arabic art and calligraphy and Christian art. This really highlighted the religious tension in Spain’s past as under the Muslims the Mezquita had been a Mosque however since the Christian invasion it had been a cathedral.

On the Tuesday, we went to Granada where we heard Spanish guitar music whilst looking out at over Granada, a Mediterranean city surrounded by snowy capped mountains, a majestic sight. We visited markets where there were all manner weird and wonderful things for sale, like Islamic lamps and beautiful jewellery. The next two days we saw more of the beauty and history of Spain including monuments, castles and gardens. It was a fun, eye opening experience which was singlehandedly organised by Señor Fernández.