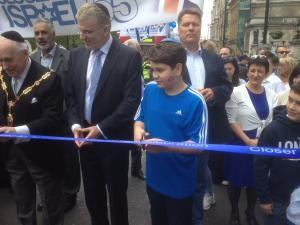 The Closer to Israel Parade took place earlier this month, where thousands of people gathered in Central London to celebrate  Israel’s 65th Birthday.  Sammy Hass (7N) and his sister opened the parade, cutting the ribbon with the Israeli Ambassador and Chief Rabbi and then leading all the floats through the streets of London. Later on in the proceedings they went on stage to present a prize to The Jewish News art competition winner and they also sang The Hatikvah with communal leaders and other children. The day was an amazing experience for Sammy and all involved.