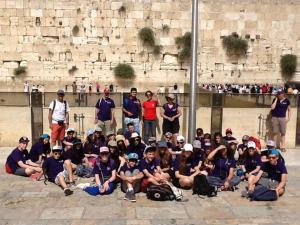 Jerusalem, the New and the Old By Kezia Niman

As a young Jewish person a lot is said to me about Jerusalem, whether it’s about the history, religious significance or just its beauty, people emphasise the city’s importance. Despite this, Jerusalem is a complex place and for some there is no fine line between the ancient texts and proven historical fact, which is why it is imperative to visit the city in order formulate an opinion of it otherwise you will never quite understand the intrigue of Jerusalem. Nothing could have prepared me for Jerusalem but looking back there is one thing that strikes me as a point of comment and debate.

Amongst the glittering gold stones that have been up standing for thousands of years there is much mystery, as cars line narrow roads and people make quick calls on their iPhones and the majestic collision between the old and new is evident and ever present. However it is this juxtaposition that is the main subject of conflict within the Jewish inhabitants of the city. The ultra – orthodox breeze past in their black hats and sweeping suits with their traditional values which are so entrenched in the way they view Israel’s modern capital and the rest of the world. Some ultra – orthodox Jews do not even accept the modern state of Israel as they believe a state can only be declared after the coming of the Messiah. And yet, there is a large population of them living in Jerusalem; this can be easily observed upon visiting. Many ultra – orthodox reject the modern world and this causes rifts to appear within the community as the more secular population and the latter are forced to coexist. New, progressive, more left wing are campaigning for recognition as the traditional, right wing orthodoxy defend their age old ways trying to resist change.

An example of where the two communities clash is the Western Wall. This remnant of the temple is a site Jews have been praying at for years. The men’s section of the wall is approximately 42 metres while the women get 14 metres. An organisation campaigning for equal division of the Western Wall known as Woman of the Wall have holding services wearing tefilin and talitot but these items are only worn by men in traditional Judaism and this new more egalitarian  style of prayer is not accepted by the orthodox community. This has been going on for 24 years but the orthodox argue the 1967 law “any religious ceremony that is not performed according to the custom of the place,” prevents the woman from performing their services. This resulted in the arrest of some women despite this they argue back that state laws ensuring freedom of religion and worship allow their right to pray according to their own customs. 10 Woman of the Wall members were arrested in February of this year. There have also been unsuccessful petitions against the women of the wall’s right to hold these types of services but in April the Jerusalem District court ruled that the woman were not violating any laws. Nevertheless, there is still a lingering feeling of conflict, affirming this was the graffiti that defaced the home of Women of the Wall member Peggy Cindor which read, “Torah tag” and “Jerusalem is Holy”. The act was labelled a “heinous crime” by the police and frowned upon by the Western Wall Rabbi Shmuel Rabinowitz. A bill has been put forward requesting an equal distribution of space between the men and women’s side of the wall by the Chairwoman of Knesset’s Committee on the Status of Women MK Aliza Lavie who belongs to the centre left party Yesh Atid (There is a Future). Although, it will take more than laws to solve the problems that form when old traditions meet modern society.

This also raises another question how far can Orthodox Jews go when it comes to demanding respect from other groups? When it does become unreasonable? This question can also be asked fundamentalist Christians and Muslims and fractions of each minority reside in Jerusalem. While orthodox and secular Jews are at logger heads there are pressures from other religions within the city too. But this is Jerusalem, home of three faiths and all the branches of those religions each with their own unique beliefs and values. In my opinion Jerusalem paints a picture of multiculturalism which isn’t always flattering. One could argue that in Jerusalem more than anywhere else religion causes more problems than it solves.

In spite of this for many religion fills the gaps in people’s knowledge and holes in their lives and so I do agree that people need to respect religions and their followers however I think it is wrong to force your opinions whether religious or not on to others and compromises need to be made. So when it comes to Woman of the Wall I think it is fair for woman to receive an equal portion of the wall to that of the men. We live in a modern world and our religious city needs to modernise with it while still maintaining respect for all the communities that inhabit it.

Moreover, except for the extreme few many orthodox Jews are embracing parts of modern world and in turn the modern Jerusalem. You now see orthodox Jews with iPhones, the latest laptops and other technology. Many of them attend university as well as having a religious education but there is a hard line that many of them won’t cross, the ideals of groups and movements like Woman of the Wall being some of them. Others may include driving on Shabbat and Army service however Army service has become mandatory for religious men who might have otherwise abstained from service. This is an example of change and modernisation in the eyes of many in one area of the ultra -orthodox community though this change has been forced by the government and not the community itself.

As I walked in the city, amongst the breath taking surroundings of gold, I felt many things, overpowering historical prevalence, the complexity of religion and most of a tension within Judaism which has escalated recently and can be expected to escalate further. Regardless of place the Jewish community is divided but this is Jerusalem and any difficulties seem to be amplified as it is the heart of Jewish life. The future of Jerusalem’s Jewish population is uncertain as is the future of all of Israeli Jews and by extension the future of the Jewish people as whole. But always has been it is only now that one may argue the biggest problem is coming from differences within Judaism itself.

My Israel Journey by Savannah Speechly

Two weeks may not seem like a long time, however those two weeks we spent in Israel has seen many of us grow, mature and changed in different ways. As we arrived on the first night the issue at hand and the worries in our minds were rooms. This was a prominent pattern throughout the trip: new accommodation, new roommates and a fair bit of anticipation to hear those names called out by Ms. Robinson. However, being in a room with people you weren’t friendly with before the trip was great, we were forced into slightly awkward social situations at first and many left the trip very friendly with people they hadn’t ever spoken to prior the journey. Being with our peers for 14 days non-stop was amazing; every single one of us has taken away laughs, experiences and memories from Israel.  The teachers would probably all agree, all the difficulties we faced on the trip were somewhat character building, and matured us along the way. Being at 13 or 14 years old and experiencing what we did on the trip, seeing ourselves now compared to before the trip is incredible. Some people ‘found’ themselves on the trip, and we have returned to London as no longer teenagers or kids, but as young adults. We are now capable of knowing who we are, what we stand for and capable of making decisions for ourselves.