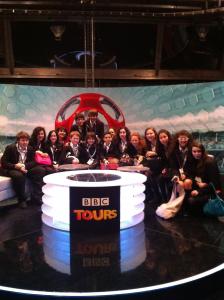 A group of Year 8 students, participants on the BBC School Report project, have been making final preparations for their News Day on March 15th, with a special visit to BBC Television Centre. The fourteen Gifted and Talented English students were given a guided tour of the iconic Television Centre, including a behind the scenes tour of studios and the BBC make up and costume departments.  They had a question and answer session with the Deputy Head of the BBC Multimedia Newsroom and Editor of the One O’Clock News, Kevin Bakhurst. So impressed was he by the enthusiasm of the group, he introduced them to BBC News Channel Presenter, Tim Willcox, and took them on a trip to the Gallery to watch the One O’Clock News as it was broadcast – some of the students and their teachers even got the chance to go onto the Studio Floor during the transmission to see the operation close up. And before they headed off home, one final treat for the budding JCoSS Reporters and Presenters – a chance to practice reading the news on the set of the BBC Three Bulletin, ’60 Seconds’.

Our students are amongst pupils from more than one thousand Secondary Schools from across the country taking part in what is the biggest ever School Report event. They’ll be using their reporting skills to cover a range of stories, from the impact the London Olympics is likely to have on their appetite for sport, to the forthcoming visit to their school by Dr Yan Wong, Presenter of BBC One’s Bang Goes the Theory, who’s visiting on March 12th to launch National Science and Engineering Week. They’re also planning a special report about making the transition from Primary to Secondary School, speaking with a group of Year 6 students who have all just been allocated places at JCoSS for September 2012.