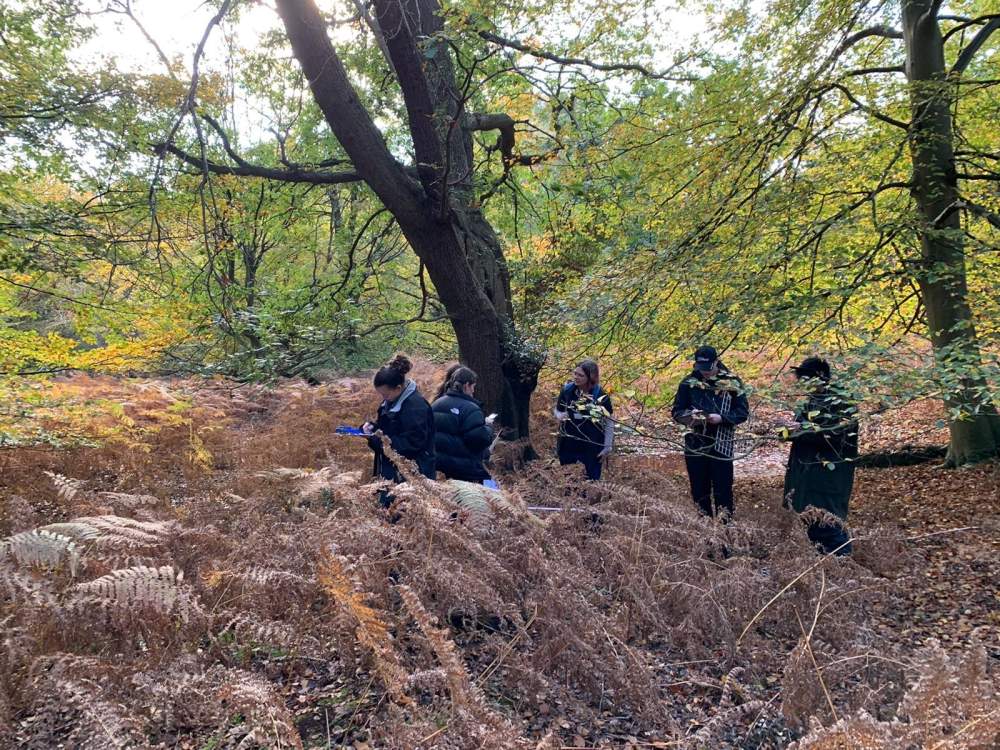 Like so many things this year, Science club has had to adapt and change to enable it to run in a Covid secure way. No longer can young science enthusiasts meet at lunchtime to do some fun practicals, but instead our new Technician Wesleigh Dawsmith is working on a virtual science club.

Initially this is being directed at sixth form students and Wesleigh will be making videos to upload, but this will hopefully develop into devising some science practicals that younger students can do at home. Students will need to join a team to take part and anyone interested can speak to Miss Meisel.

We also would like to take this opportunity to congratulate Wesleigh who, since joining us in September, has passed his PhD. Well done Wes!

Despite this year not being normal in so many ways we were still able to take 14 of our Y13 ‘A’ level Biology students on their 2 day field work study at High Beach, Epping Forest. Epping Field Studies Centre (FSC) was operating as a Covid secure educational establishment with strict regulations in place. That said the majority of the course was spent outside collecting data, with a return to the classroom only for lunch, and to complete the statistical analysis of the data.

The 2 days took place in the last week before the autumn half term.  It was hoped that we would have the perfect weather for appreciating the beauty and warmth of the autumnal colours. Instead the first day it poured with rain continually.  This proved a little challenging for the students trying to record and keep their data dry, writing on a clip board inside a plastic bag. At lunch they tried to dry off their outer wear on radiators in the classroom, but the rain had seeped through to all layers of clothing and after lunch they had to replace their cold, damp coats which had hardly dried out at all.

Strangely the offer in the morning for the loan of a very fetching white plastic poncho had only seen one student take this up. In the afternoon practically all students were donning these less than fashionable garments. It is amazing how time outdoors spent in inclement weather can change your views on what it is acceptable to be seen in!

Fortunately the second day was dry, and a little sunny and altogether much more pleasant. The FSC tutor gave a ‘tour’ of some of the forest and imparted some of her wide knowledge about the trees. In the forest there are ancient trees (very old), veteran trees (those that are old and have survived some type of catastrophic damage such as a lightning strike) and phoenix trees (those trees that should really be dead having fallen over or snapped off near to the ground but have survived due to a small amount of living root). It is the best time of year for fungi and amongst many observed was the distinctive red and white toadstool Fly agaric. Spotting that one had obvious tooth marks, was followed by a little discussion on whether various fauna like to have a little nibble or ‘fix’ for their hallucinogenic properties.

Over the 2 days the students did various types of quadrat sampling, comparing light and dark areas. A 10m transect investigating the effect of trampling on the growth of sorrel, and
a 30m transect investigating succession.  This work and the subsequent statistical analysis (T-Test, Spearman’s Rank) forms one of their required practical’s at ‘A’ level.

Despite the weather on the first day the students remained motivated and good humoured throughout. On the second day they were ‘rewarded’ by visiting the FSC very captivating resident albino axolotl (critically endangered amphibian) and seeing him being fed.

Thanks goes to Tracy Wise for driving the minibus on the second day – dropping us off and returning later to pick us up.

And finally…
Science again maintains some normality by continuing with its nominations for student of the month across the year groups. Our congratulations goes to the following 4 students who have each had 2 nominations since September. Well done and keep up the good work – Gabriella Stern Y10, Isaac Reuben & Jake Grayson Y11 and Aran Haber Y13.