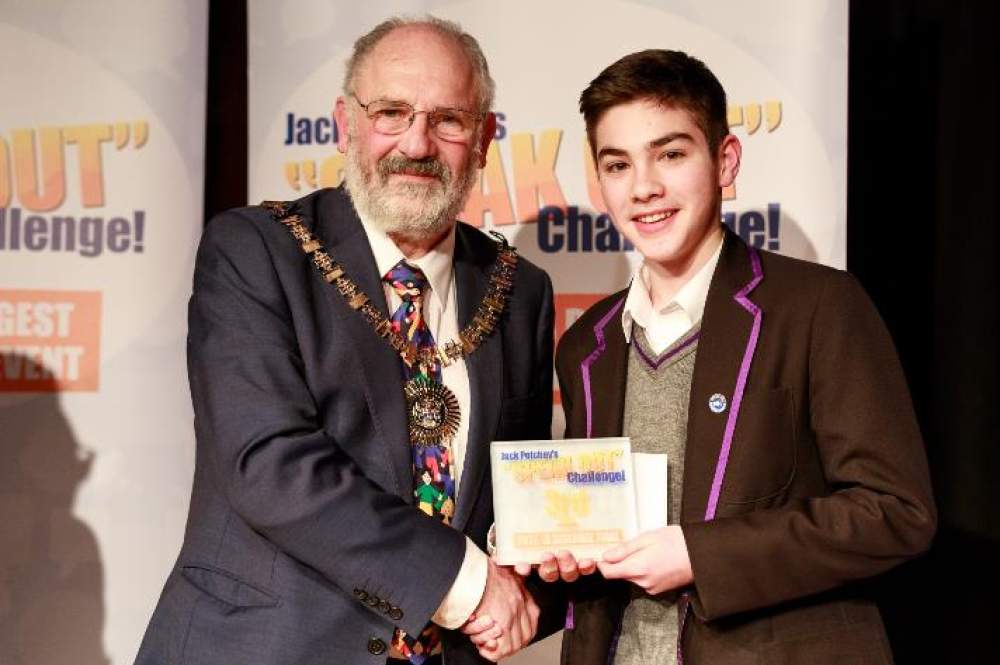 On the last day of January 2018 Aaron Maurice, the JCoSS Speak-Out Champion, and a posse of ardent followers circumnavigated the rush hour traffic of North London in order to arrive at Mill Hill County High School for six o’clock, sharp. The occasion was the Barnet Regional Final of the Jack Petchey Speak-Out challenge. We were greeted by Mill Hill’s finest: shirts ironed and shoes polished, ready to welcome revered guests from far and wide. Notable attendees were Mayor of Barnet Brian Sallinger and the Borough Commander of London’s Fire Brigade Steve Leader.

Around 200 souls assembled in the Great Hall, parental nerves were palpable and the atmosphere was electric; friends and family were there in droves, willing their school champion on and, as was the case for me, on shpilkes. There were 20 competitors and Aaron was number 18 – when I noted that he had been billed to perform 18th I had a good feeling. 18 is an auspicious number in Judaism – its value is חַי which translates to ‘life’ in English. If you watch Aaron’s speech (link below) this significance will become clearer.

The bar was high and, as the speeches progressed, the competition was blown wide open. Students spoke on a variety of topics ranging from Slavery to Bitcoin, and then Aaron’s moment arrived. He walked onto the stage and immediately filled it with his presence. He spoke eloquently, confidently, with passion and from the heart. You could hear a pin drop in the auditorium.  The audience responded with rapturous applause and we could not have been more proud.

We were serenaded by Mill Hill’s Philharmonic Orchestra whilst the judges made their decision. Aaron placed third and shared the podium with the first placed student from
Hasmonean Boys’ School and the second placed student from Wren Academy. All in all, a great success.