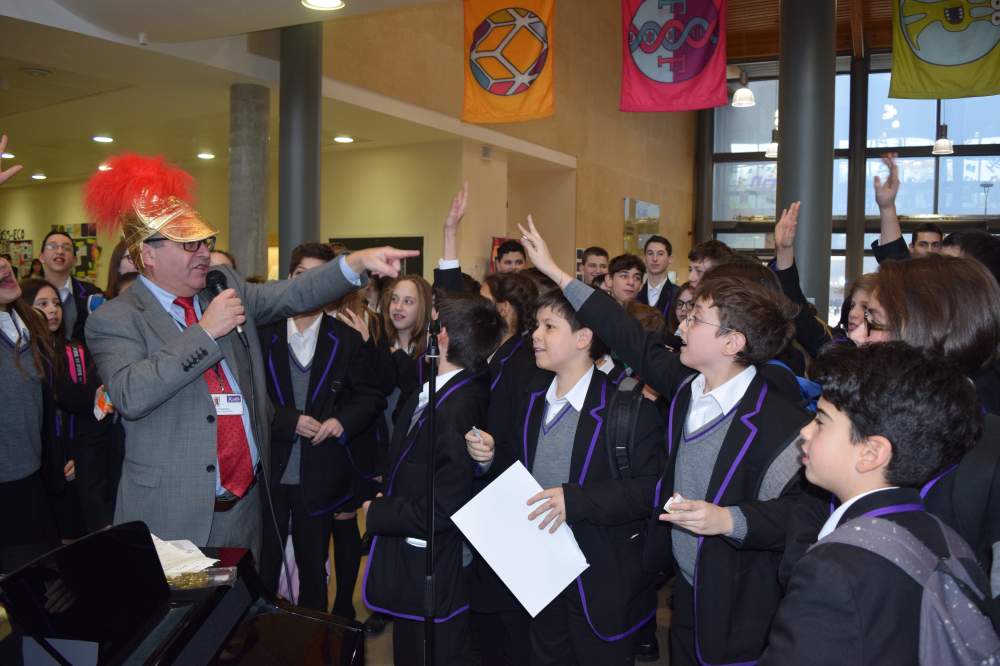 Who were the Greeks and Romans? Why do they still matter? How do they help us to understand ourselves? Questions tackled head on during a week-long immersion in all things Classical.

The week began with the premier of ‘Classics Week: The Movie’, directed and produced by a talented crew of Year 9 students and starring Mr Moriarty, Mrs Juggler, Mr De Jong, Miss Stock, Mr Senessie, Ms Sanford and Daniel Rainbird (Y9). The JCoSS choir gave a live lunchtime concert in the Heartspace, of Beatles songs translated into Latin, Mr Brookman was at the piano in full gladiatorial gear.

Each day, a passionate team of ‘Classics Ambassadors’ (a.k.a. Year 9 Latin students) led a range of activities, including a charity slave auction, with Mr Rosenberg Senior as ‘venalicius’ (slave-dealer), various Latin quizzes and Roman board game stands.  The A level drama students gave a series of impressive performances of extracts from Euripides’ ‘Trojan Women’ in a series of assemblies.  Kvutzah was themed around decoding famous Latin sayings and students across the school competed for House Points with a student-made form time Classics Quiz. In their LRC lessons, students enjoyed browsing a display of the school’s wide range of books relating to the Classical world.

The week culminated in a series of consecutive workshops at school led by the Globe Theatre focusing on Shakespeare and the Romans. Participation in these workshops was a prize for the winners of our KS3 ‘Myth Making competition’, in which students from across Years 7, 8 and 9 had, in the run up to Classics Week, produced a magnificent array of creative responses to the story of Echo and Narcissus. These works, inspired by the timeless tale of vanity and unrequited love, formed an impressive display in the Heartspace to be enjoyed by the entire school community throughout the week.

Thank you to the charity, ‘Classics for All’ for supporting JCoSS’ growing Latin Department, enabling it to stage what has now become an annual fixture in the school calendar.