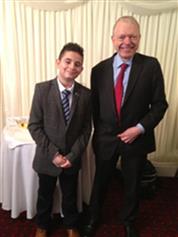 We are extremely proud and pleased for Denis Antor in 8B who won a competition he entered through “First News”, a newspaper aimed at students which we receive every week in the LRC.  See below his experience at The House of Lords and his photo taken with Lord Hunt of Kings Heath:

When I arrived with my parents at The Houses of Parliament it was early, so we thought we might try to visit it.  Luckily the
guard let us in so we then had to go through security which was like at an airport.  Then we saw the House of Commons debate about
the consumer rights bill, which sadly was short.   Afterwards I went to the House of Lords where we had to go through security again, after
which we went to the Cholmondeley Room & Terrace where all the Lords eat.  Soon the presentation started; it was about how people are
affected by CO poisoning and we met Baroness Finley who spoke about what CO-Gas Safety do.   We met heroes of the charity and survivors of
CO poisoning; then Stephanie, the co-director of the company, nominated me as the junior ambassador for CO-Gas Safety. I met people from
Ofgem, Gas Safe, British Gas, Wales & West Utilities. After the presentation I spoke with Stephanie who was so impressed by my
ideas that she decided to recruit me as a member for the charity.  I had a truly amazing experience.