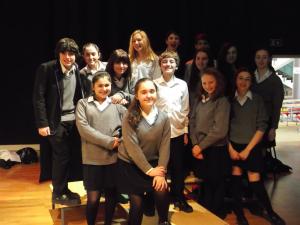 On the 3rd March at the Barn Theatre in WGC, the JCoSS entry in this year’s Festival was ‘Playing From The Heart’ by Charles Way.

The play concerns the childhood of the world-famous percussionist Evelyn Glennie who, having had failing hearing from the age of 8, was diagnosed as profoundly deaf by the time she was 12. This in no way thwarted her spirit, nor her determination. In the face of adversity, Evelyn decided she was going to become a professional percussionist. Through her talent and perseverance, Evelyn won a place at the Royal College of Music in London. The rest is history.

This year, auditions were open to the GCSE Drama students. The play was cast, rehearsals commenced in earnest in January and the challenge was on! Firstly, Evelyn is Scottish – and when playing their roles, all seven students had to deliver their lines in a Scottish accent. And they did just that! To perfection! And noch….in addition, they succeeded in switching their ‘Scottish’ characters with other cameo roles throughout the piece. Our young, talented cast guided their audience through an unforgettable 50 minutes of pathos and humour, performing with maturity, pace, subtlety, focus and panache.

On the 70th Anniversary of this prestigious Welwyn Garden City Festival, the JCoSS team rose to the occasion once again, winning 1st place
and the Elizabeth Cory Wright Trophy.