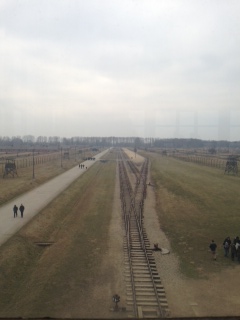 On Wednesday 5th March a number of Year 13’s woke up at 4.30am to make the journey to London Stansted to catch the 8.30am flight to Krakow in Poland. If we thought that we were going to have an easy time when we got there, we were very much mistaken. On arrival the fresh cold air hit us before boarding onto the coach that was waiting for us.

From taking our seats on the bus we were straight off to our first destination, which was the Labour camp in Plashov before taking a walk up the road to the Nazi Commanders house, which belonged to Amon Goeth.  Following this we drove into the Jewish quarter in Krakow to find out about the Jewish life which existed before the war had taken place which included visiting cemeteries, synagogues and other important Jewish sites.  For dinner, we took our seats at the Jewish Community Centre in Krakow where we were treated to some incredible food and were able to talk to Polish Jews, before Ms Robinson stated her famous catchphrase “any questions, thoughts or reflections?” It was when these words came that we knew it was the end of day one and finally we could all go to sleep after such a long and packed day.

The next morning, after an ‘interesting’ breakfast, we got back onto the coach for what we knew was going to be an incredibly hard day. We were off to Schindlers factory,  Auschwitz and Birkenau. The museum was extremely interesting and spread over such expansive time period from the before the war and after the war. Then it was the time that we all knew was coming:  going to Auschwitz. We started to walk around the camp with the feeling of regret and emotion.  Seeing some extremely graphic images made us all realise what really did take place, and how lucky we actually are.   We then made the 2-mile drive to Birkenau, to the death camp of the Jewish people. Unless you have seen it in real life you would never comprehend the size of this camp in every direction. Just walking around sent a shiver up my spine and walking on land that the Nazi’s and dead Jewish people were on, made me speechless. At the end of this terrible experience we had a memorial service where Dominic Coleman read a poem, Yonatan Weiger read Kaddish and Chloe Alexander read some facts about the Holocaust, before all lighting our own individual candle and leaving the camp before catching our plane back to London.

When arriving back to London we all spoke about our reflections of the trip and how we could help and carry on the legacy of the Holocaust.  Thank you to Ms Robinson, Miss Juggler and Mr. Stump and to all the staff for everything that was put into making this experience, which will not be forgotten. On behalf of the whole year it was something that will be spoken about for many more years to come.