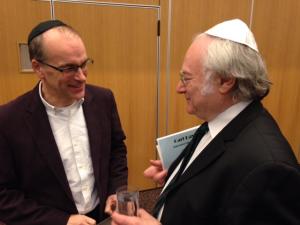 JCoSS was approached by the New North London Synagogue to perform two songs from Carl Davis’ Last Train to Tomorrow and support their commemoration of 75 Years since the Kindertransport. Carl Davis CBE wrote this piece to provide a narrative of those children who journeyed on the Kindertransport between 1938 and 1939 – escaping Nazi Germany and arriving in England.

The JCoSS Music department put together a small group of singers and learnt the songs in a handful of sessions – Carl Davis came to the school for two of these where he introduced the songs to us and spoke of the meaning behind them. We rehearsed with the composer accompanying on the piano.

As part of the Holocaust Memorial 2014 we performed the songs, with Carl Davis,  to an audience of New North London Synagogue members, parents and ‘Kinder’ who came to the UK as children. After an introduction from Rabbi Jonathan Wittenberg and Carl Davis we performed the two songs – and then heard stories from the Kinder.

It was a very warm and moving event – which we were very honoured to be a part of.