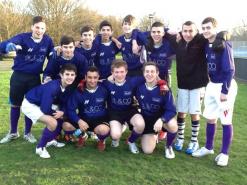 Could they do it on a cold, wet, Wednesday night in Copthall? Harry ‘Mariah Carey’ Soning led the team in song on the team bus, driven by legend of the game Mr Mitman. Sports Minister Dom ‘Theodor Herzl’ Michaelson led the JCoSS army out into the Promised Land, the first match of the new year. He reminded the team of Bradford City’s recent heroics in the League Cup, where they have beaten several Premier League sides on the road to the final (whom have in turn beaten Chelsea, arguably making Bradford the Champions of Europe?) and how, with the hundreds of loyal supporters back home in New Barnet, anything was possible. As the self-designated ‘pride of East Barnet’ arrived at Mill Hill Power League, the excitement was palpable. The team took with them JCoSS’s friendly and open ethos, and admittedly were caught off guard when the day’s opponents, Hendon School in red, brought with them only an ethos of looking terrifying and being  6″8.

The purple sea parted. Michaelson guided Mann, Pelled, Nathan, Soning and Wegier out, with Tucker, Coleman, Van Straten, Steiner, Harris and I on the other pitch.

Prolific goal-scorer Mann gave JCoSS the lead, slotting away a one-on-one opportunity. But the lead wasn’t to be, as Jordan ‘Lee Dixon’ Mann put the ball in the back of his own net. Despite attractive possession football the Purples continued conceding, going 3 goals down. Pelled appeared to take a knock within the half, not for the easily repulsed. Michaelson knew what he had to do 1-3 down, and with half-time came some words of wisdom. “Pass-and-move boys, pick a man and stick to him!” The come-back began with Nathan, and Wegier kept the side in the game on various occasions from between the posts.

Next to Michaelson’s VI the team started nervously. Our counter-attacking style produced the goods early on, with the team also opening the scoring. Hendon appeared to be storming ahead at 1-3, but however much they barred out the windows and shut out the lights we would not let them close every door to us as we scored again. Dom ‘Bressan’ Coleman put away a cracking volley.
Regardless, the ‘Purple and Whites’ went into the break suffering 3-5. Sporting his new navy hairstyle, Coleman led the talk. JCoSS could not afford to start a tradition (Tradition! Tradition!) of embarrassing defeats. It didn’t get better when, despite bouncing off two posts and returning to the field of play, the reds had another goal awarded. The tides began to turn. In the same assured fashion as his goalkeeping,
Ballon D’Moriarty candidate Van Straten comfortably put away a penalty. JCoSS came close again after a disallowed goal, and eventually taking the game to 5-6.

Despite two (suspicious, which matches are being investigated by Europol again?) defeats, the Purples lost no pride. We came
up against a technically gifted Hendon side and nearly came out with results. Our games ended 2-4 and 5-6 respectively, with Pelled breaking his nose in sacrifice to the cause. We wish him better and would like to thank Mr Mitman for organising the game; his efforts are invaluable and always appreciated!